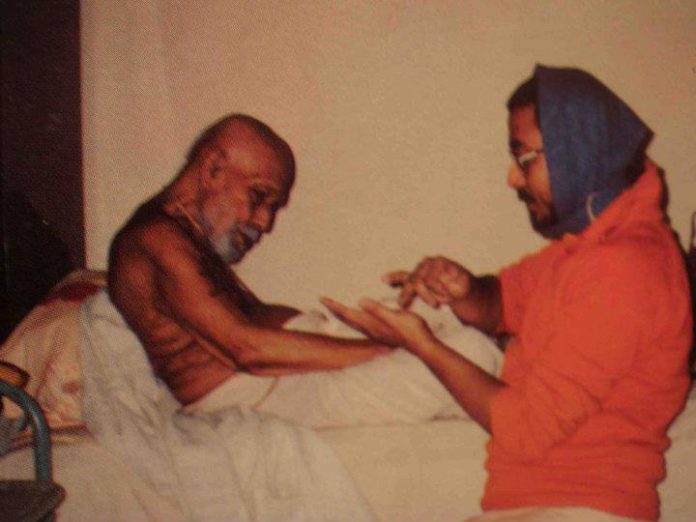 Krishna told Nanda Maharaja – It is by the force of karma that a living entity takes birth,
and it is by karma alone that he meets his destruction. His happiness, distress, fear and sense of security all arise as the effects of karma.
asti ced īśvaraḥ kaścit
phala-rūpy anya-karmaṇām
kartāraṁ bhajate so ’pi
na hy akartuḥ prabhur hi saḥ
(10.24.14)

Even if there is a supreme controller who awards all the result of their activities, He
must also depend upon a performer’s engaging in activity. After all, there is no question
of being the bestower of fruitive results unless fruitive activities have actually been performed.

The action or karma that is not performed to satisfy the Supreme Lord and any
knowledge that takes us away from the Lord has been termed as being poison. Bhautika
Karma (action performed for material gain) increases our tendency towards material
gain, name and fame. All these are obstacles in the path of devotion. Keeping
hypocritical monks like me in their vision, my most revered Parama Gurudeva’s (Srila
Bhaktisiddhanta Saraswati Goswami Thakura Prabhupada) spiritual master, most
revered Gurudeva Nityalila Pravista Om Vishnupad Paramhamsa Kulacudamani Srila
Gaura Kisora Dasa Babaji Maharaja had mentioned as follows –

renunciation will appear spontaneously. Devotion should not be revealed to others and
should be practiced very covertly to develop spontaneous love in the heart. If there is no
real attachment towards the Lord and there is only a display of artificial renunciation,
then there is no chance of attaining the mercy of Krsna; rather, it takes the person away
from the Lord. Krsna comes rushing towards that devotee who has real attachment
without hypocrisy. One who has accepted the robe of false renunciation, has not a tinge
of real devotion towards Lord Hari, but instead remains engrossed in material sense
enjoyment is deceived by Krsna to that extent. One who has spontaneous attachment for
the transcendental form of the Supreme Lord Sri Hari, despite externally suffering from
leprosy, still captivates Krsna by the fragrance of his own limbs due to his service
attitude.”

From the above mentioned words of Srila Babaji Maharaja, it has become clear that Lord
Sri Hari cannot be satisfied through hypocrisy. This human birth is only meant for serving
the Supreme Lord. Being covered by the web of illusion, we give no importance to the path
of devotion, which is the only way to please the Lord, and take shelter of the path of
knowledge and action. We take various bodies in this illusory world and wander through
material existence. The Supreme Lord has given us this human body and sent us to this
world of suffering. We need to completely free ourselves from the clutches of illusion
and develop attachment to serving the most worshipful Lord Sri Hari. In this life, we can
return for eternity to the eternally blissful spiritual world of the Supreme Lord.
People who are overcome by the illusory energy of this material world and use their
intelligence to satisfy their senses rather than satisfying the senses of the Supreme Lord,
become deviated from the ultimate goal of human life, which is to relish divine
knowledge. They have drowned themselves in eternal distress.

We know from the conversation between Dharmaraja in the form of a crane and
Dharmaraja Yudhisthira, that “mahajano yena gatah sa panthah” – great personalities
have shown through their example that becoming engaged in the service of the Supreme
Lord in Goloka is the highest goal of life, which is achieved solely through devotion.
The spiritual masters of the Vaisnava world have given us the teaching of this path of
devotion through their own example. My Gurupadapadma established Sri Gopinath
Gaudiya Math to teach us how to traverse the path of devotion in our daily lives. We
know from the scriptures that devotion takes living entities to the Supreme Lord.
Devotion gives vision of the Supreme Lord to the living entity. That Supreme Personality
is only subordinate to devotion—therefore devotion is supreme.

The childhood devotional life of my Gurupadapadma serves as a prime example for
today’s society. My Gurupadapadma was the ornament of the community of pure
Vaishnavas, and gave the teachings of how to become humble to the human community.
However, what are we doing today? If we analyze this, we will understand that there is a
lack of pure devotion. The root of Vaishnava-dharma is humility. Saccidananda
Bhaktivinode Thakur explained through his kirtana, “dainya daya anye mana pratistha
varjana // cari gune guni haye karaha kirtana” – Practicing pure devotion is the Vaishnava
Dharma. In reality, Vaishnavas are sadhus. They practice pure devotion and work for the
ultimate spiritual benefit of all living entities in society. These Vaishnavas have unlimited
qualities but in their practice four main qualities are seen – humility, well wisher for all
living entities, having the compassion upon them to reveal their true constitutional
position and offering respect to all while completely rejecting all forms of position. Such
individuals take shelter of the Hare Krishna Mahamantra wholeheartedly and without
causing any offense. Their hands will be holding the holy chanting beads and the holy
names will be dancing on their tongues. However, we misuse our independence and
deceptively utilize the teachings of the previous acharyas to justify gratifying our own
senses in the name of satisfying the senses of Krsna. As a result, the majority of
Vaishnavas are constantly busy preaching their own greatness to the world rather than
practicing natural humility. Therefore, it would not be a lie to say that the supreme result
of Vaishnava dharma, namely having loving relations between one another, is absent in
the Vaishnava society today. The author of Sri Caitanya Caritamrta, Srila Krsnadas
Kaviraj Goswami, who is Kasturi Manjari in the spiritual world, in humility has written,
“purisera kita haite mui se lagistha jagai madhai haite mui ta papistha” – Srila Kaviraja
Goswami said that he is lower than a worm present in stool and that he is more sinful
than Jagai and Madhai, who had performed all sinful activities in Lord Chaitanya’s
pastimes. Once, when a Vaishnava said that my Gurupadapadma is a kanistha-adhikari,
which made me angry, but my Srila Gurudeva responded by saying, “O, I am lower than a
kanistha-adhikari. I am not qualified to be called a kanistha-adhikari. However, this
Vaishnava has had mercy and given me the right to be situated on this level. This is a
matter of joy for me. Rather than becoming angry, you should be blissful regarding this
matter.”

Due to a lack of Vaishnava qualities amongst the Vaishnavas in the present Vaishnava
society, we see deceit, pride and quarrel present instead of love. Those who have taken
up the path of devotion to become Vaishnavas have a duty to look deep within their
hearts on how to develop these Vaishnava qualities. Otherwise, the supposed practice of
devotion in search of the ultimate spiritual goal will be a mere joke. The actual meaning
of devotion is to serve the Supreme Lord and His devotees with love from the core of
one’s heart. There is no room for deceit, pride or quarreling for establishing one’s own
territory. This servant, who is filled with desires and who is an offender of Vaishnavas,
prays to Srila Gurupadapadma Nitya-lila-pravista Om Visnupada Srimad Bhakti Pramode
Puri Goswami Thakur to please bestow upon me the right to follow the four Vaishnava
qualities as described above for serving your divine lotus feet. Please bless me to chant
the Hare Krishna Mahamantra, being free from offenses till my last breath. Give me
intense strength in my heart to follow the Bhakti Dharma, which is the only path through
which the supreme spiritual treasure is attained.

An unqualified servant desiring to become a speck of dust at your lotus feet,
B. B. Bodhayan