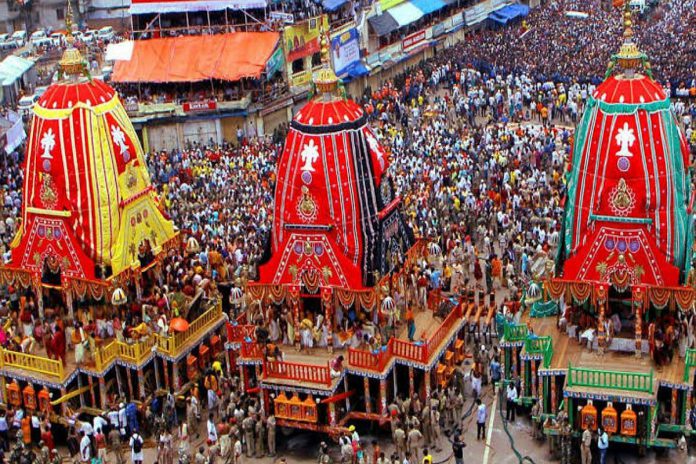 When Lord Krishna became overwhelmed with ecstatic love upon hearing the glories of His devotees, His body transformed into the form of Lord Jagannath. Lord Jagannath represents Krishna’s ‘golita’, or ‘molten love’ form. Sri Jagannath Dev’s Ratha Yatra festival is a very significant festival for us all. We attend this festival to uplift our devotion by seeing this form of Lord Krishna when He comes out of the temple. The temple authorities do not allow everyone to enter the temple. Jagannath means ‘Lord of the universe’. There are countless living entities in this universe, and He is the Lord of all, but due to the restrictions set by the temple authorities, there are those who are unable to take darshan of Lord Jagannath. To alleviate their sorrow, He decides to come out of His temple and give His darshan to all.  The Lord expressed His desire to His devotees that a festival should be arranged to mark this occasion, and we know this festival as the Ratha Yatra festival. This truly is a festival for people of all faiths. The followers of the four bona fide sampradayas (spiritual lineage), Sri, Brahma, Rudra and Sanak, all gather at the Ratha Yatra and ecstatically participate in the festivities.

Those who have attended this festival will have experience of the number of people that gather there. They come for one purpose, and that is to take darshan of Lord Jagannath. They do not think about the scorching heat they have to endure, nor the pushing and shoving they have to tolerate. Their only goal is to somehow get close to the chariot, be able to see the Lord properly and pull the chariots forward. This one-pointed mood of ignoring all troubles and inconveniences just to serve the Lord is very significant. In this path of spirituality, if one truly wants to meet the Lord, then they must be ready to face all the challenges given by the illusory energy in this material world. Maya Devi is always troubling us in so many ways. In this age of deception (Kali Yuga), the process of spirituality is based on chanting the Hare Krishna Mahamantra. We can see that during chanting, we are faced with so many mental obstacles. Our mind struggles to focus on the Hare Krishna Mahamantra which is the embodiment of Sri Sri Radha Krishna. We start to feel sleepy, and our mind gets filled with thoughts that wouldn’t usually enter the mind. However, if we show determination in our practice, then the Lord will help us to reach Him.

When we try to render service with our best endeavour, and the Lord’s mercy is on us, then we will be able to reach our ultimate spiritual goal. So, the problems people face whilst participating in the Rath Yatra festival represents the challenges that must be faced in order to get darshan of the Lord. We know that our heart and consciousness are full of unwanted mundane desires. Even if we try, it is impossible to get the mercy of the Lord. Therefore, the Lord mercifully guides us to a guru. The Lord appeared as Baladev who is Guru Tattva. For this reason, the chariot of Baladev is first pulled forward. As soon as we satisfy Baladev by sincerely pulling His chariot, we will be eligible to get the mercy of Guru. With Guru’s mercy, we will be qualified to meet Bhakti. Subhadra Devi represents Bhakti Devi and Her chariot is pulled after Baladev’s. When we are able to please Subhadra Devi by pulling her chariot, then we will accumulate bhakti, and be qualified to pull Lord Jagannath’s chariot. This is the process to meet with the Supreme Lord and render service to Him.

We know from different scriptures that in this age of deception (Kali Yuga), the Supreme Lord Sri Krishna appeared in the form of Lord Chaitanya Mahaprabhu to taste His inner most desires:

One of the reasons Lord Chaitanya Mahaprabhu appeared was so that He could taste the vipralambha bhava (pangs of separation to meet with the Lord) for Krishna. Eighteen years of His life was spent at Jagannath Puri.  Swarup Damodar (who is Lalita Sakhi in Krishna’s pastimes) wrote in Sanskrit the three internal reasons why Lord Krishna appeared as Lord Chaitanya, with the mood and complexion of Srimati Radharani.

This verse highlights the reasons why Lord Krishna came down as Lord Chaitanya in the mood of Srimati Radharani;

To understand the greatness of Radharani’s love, the happiness She relishes through Her love for Krishna and the taste of this happiness, which only She feels, the Lord appeared from the womb of Saci Devi.

The day before the Ratha Yatra festival, Lord Chaitanya, along with many of His devotees went to clean the Gundicha temple. From the 2nd to the 10th day of the waning moon cycle of Ashad month (the third month of the Vedic calendar), Lord Jagannath stays at Gundicha temple for 9 days. Lord Chaitanya examined the Gundicha temple as though it is the heart inside the body. He cleaned the temple so well and carefully that not a spot of dirt remained in the temple. Everyone cleaned the temple according to the direction and instructions of the Lord. If the Lord noticed a slight mark or stain left on the floor then He would immediately have it removed. He would say ‘we have to clean every bit of stain. This stain represents material name, fame and desire. If this stain is left, then the Lord will not appear in our hearts.’ In this way, through the cleaning of the Gundicha temple, Lord Chaitanya taught us that by chanting the Hare Krishna Mahamantra we will be completely free from the material stain of self-recognition, name, fame and desire.

On the day of the Ratha Yatra festival, Lord Chaitanya organised seven sankirtan groups to perform in front of the chariots. The seven sankirtan team represents the seven islands which makes up this world. They are called; Jambhu dvip, Plaksha dvip, Shalmali dvip, Kusha dvip, Kraunca dvip, Shaka dvip and Pushkara dvip.

“The chanting of My name will spread in every town and village in this world.”

When King Prataparudra heard of Lord Chaitanya’s presence in Puri, the King desired to meet the Lord, but the Lord refused to meet with the King, (due to king’s being under the mode of passion). When Lord Chaitanya’s followers saw how desperate the King is to take darshan of the Lord, they pleaded with the Lord that the King is very devoted, to take mercy on the King him and allow the King to see Him. The Lord said, ‘‘if you all insist on me meeting the King, then I will leave and go to Alarnath.’ The Rath Yatra festival is a time when the Lord bestows His mercy on everyone. The devotees wanting to help King Prataparudra advised him to attend the festival wearing regular clothes so he looks like a common man. According to the direction and instructions of the devotees, the King left his royal attire and wore ordinary clothes and attended the Ratha Yatra festival looking like a regular devotee. Internally, the Lord is fully aware of King Prataparudra’s devotion and desire to take darshan. To create the right situation to bestow His mercy on the King, the Lord pretended that He was tired from dancing and chanting with the seven sankirtan groups. The Lord broke away from the groups and sat down on the side to take rest. The devotees immediately signalled to Prataparudra to grab this opportunity and to go and massage the Lord’s feet. They told the King to chant the Gopi Geet whilst doing so. Gopi Geet was recited by the Gopis (intimate associates or sakhis), when Lord Krishna disappeared from the rasa dance. Out of intense separation from Krishna, the Gopis searched for Him all around Vrindavan whilst singing the Gopi Geet.

As soon as King Prataparudra recited ‘bhuri-da janah’, the Lord got up and embraced the King, exclaiming ‘bhuru-da, bhuri-da!’ He had refused to even look upon the King, yet now, the Lord was not only looking at King Prataparudra, but had him locked in an embrace. By doing so, the Lord bestowed His love to the King. The King’s recitation of the Gopi Geet stirred loving emotions in Lord Chaitanya – the moving form of Lord Jagannath, and He embraced all the devotees out of ecstasy.  In this regard, in order to enjoy the Lord’s loving embrace, we must first be free from all types of material appreciation, distinction and desire.  Lord Chaitanya’s entire life depicts and teaches us how to be free from these material desires. In Sanskrit, the Lord says;

Chanting of the Harinaam sankirtan removes the dust in the heart and extinguishes the blazing forest fire of material existence and ends the cycle of birth and death. This sankirtan movement has come to benefit all of humanity by allowing us to taste the nectar of transcendental bliss.

The Ratha Yatra festival signifies the importance of being under the guidance of Guru and Vaishnavas. The stain of material recognition and desires that exists in our hearts can be wiped clean through the chanting of the Hare Krishna Mahamantra and by being in constant association of the Vaishnavas. This is the message given by Lord Chaitanya. Until and unless we are free from this dirt of materialism, we will not be able to reach the Lord and serve Him as His eternal servants. The meeting of King Prataparudra and Lord Chaitanya shows how we should approach this festival and with what mood we should present ourselves before the Lord at the Ratha Yatra festival.