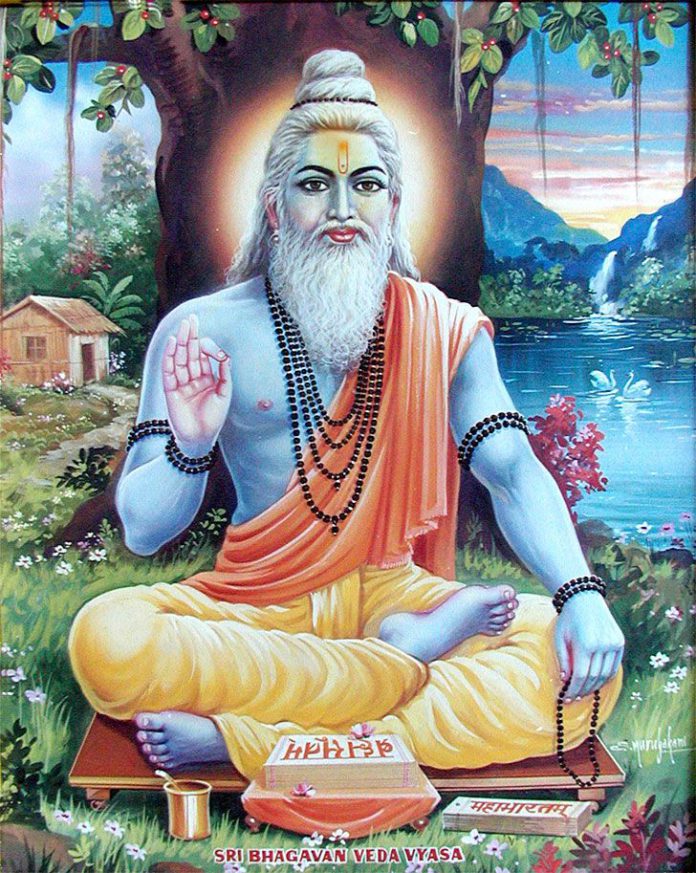 In different ages and to meet a particular purpose, the Lord descends on Earth in various incarnations known as avatars. When the Lord chooses to expand Himself and appears with a particular power to execute a specific activity, it is known as Shaktyavesha avatar. The Supreme Lord appeared in His 17th incarnation in His shaktyavesha avatar known as Krsna Dvaipayana, the son of Parasara Muni and Satyavati Devi. The main purpose of this avatar was to compile and organise the Vedas, and thus he is more famously known as Veda Vyasa (Vyasa means to divide)

When Satyavati was an unmarried youth, still living with her father, during the day she used to carry passengers on her boat to cross-river Yamuna. One day, Parasara Muni was crossing the river on her boat when he became very attracted to Satyavati’s beauty. Desiring to be with her, he created an island with thick fog surrounding them with his mystical powers. From this union, Satyavati gave birth to a baby boy. He was dark in complexion and was born on an island, hence he was given the name Krishna Dvaipayana.

India is known as Bharat-varsha (Land of Bharat) after the great emperor, Chakravarti (universal ruler) Bharat. He ruled the sub-continent from the capital of his kingdom called Hastinapur. When the time came to hand over the kingdom to the next in line, King Bharat could not find any one of his sons to be worthy of being an ideal king. Instead, he found all the qualities of an ideal king in one of his citizens called Shantanu and so he crowned Shantanu as the new king. Shantanu first married goddess Ganga, and they had a splendid son called Bhisma. When Ganga returned to heaven through her own will, Shantanu, later, being attracted to Satyavati, married her and so Satyavati became the queen of Hastinapur. They had two sons called Chitrangad and Vicitravirya. Chitrangad died at the hands of a Gandharva, and Vicitryavira was left to rule the kingdom. He married two sisters called Ambika and Ambalika. A dark period set over the royal family when Vicitravirya suddenly died of a lung infection, leaving no heir to the throne.

Bhisma approached Satyavati to ask for advice on what is to be done to ensure the progeny of the kingdom. Bhisma had taken a vow of celibacy and hence could not serve as a brother to continue the progeny of the kingdom. At that time, Satyavati explained about her son Veda Vyasa who was in the Himalayas writing commentaries on the Vedas. She remembered Vyasa with the permission of Bhisma and Vyasa appeared immediately. Satyavati explained how Vicitravirya was one of her sons and thus Vyasa was his brother and should perform the act of expanding the progeny of the kingdom. Ambika closed her eyes upon seeing Veda Vyasa and thus gave birth to the strong but blind Dhrtarastra. Ambalika became afraid upon seeing Veda Vyasa and thus gave birth to the meek Pandu. Satyavati told the elder daughter to again go to Veda Vyasa but she did not listen and rather sent her maidservant. The maidservant upon seeing Veda Vyasa acted just in accordance with Vyasa and pleased him and thus gave birth to the intelligent, Vidura.

Srila Vyasadeva is the writer of the Vedanta Sutras as well, which give the conclusions of all the Vedas. He is also the author of the natural commentary on the Vedanta Sutras which is the Srimad Bhagavatam. After splitting the Vedas into four, He wrote the itihasas and puranas for the general direction of the people. Seeing through his divine vision the deterioration of the coming era, Veda Vyasa’s work was for the greater well being and benefit of mankind, yet he did not feel content and satisfied within himself.

He sat in meditation on the banks of the Sarasvati River at the Samyaprasa Asramaa located about 1000 feet above Badarinarayana temple at Badarikasrama.

Narada Muni appeared and asked Him, “Why do you seem so unhappy? What is wrong?”

Vyasa Dev replied ‘My dear Gurudev, I have explained everything for the well-being of mankind, yet I do not feel happy and satisfied. What is my defect? Please tell me what I should do?”

Narada Muni is Vyasa Dev’s spiritual master, and here Vyasa Dev is showing how a disciple should surrender at the lotus feet of his Gurudev.

Narada Muni explained ‘You have written a wealth of literature, but it is not sufficient. This is because you have given importance to dharma (one’s material duty), artha (economic development), kama (sense enjoyment) and moksha (liberation). You have discussed jnana yoga and karma yoga mixed with bhakti yoga. You must exclusively present pure bhakti-yoga. That is what you must do.’

Vyasa Deva pleaded ‘kindly guide me on how I should do this.’

Narada Muni instructed ‘You have done everything for the welfare of mankind, but the true welfare of all living entities is knowing about the spotless qualities, pastimes, form and holy names of the Supreme Lord Krishna. You must discuss the Lord’s attractive qualities, his beautiful form, his sweet pastimes and the power of His holy names. This will be the true well-being of all.’

All followers of Sanatana Dharma worship Srila Veda Vyasa on His appearance day on the tithi of Asadhi Purnima (full moon day); This full-moon-day is appearing four days after Sayan-Ekadasi day. This day, we, Sri Gaudiya Vaisnavas are observing Vyasa-Puja.

What is Vyasa Puja?

Vyasa Puja means to worship Vyasadeva, the energy incarnation of Lord Krsna who is the spiritual master of the entire spiritual lineage. All initiating spiritual masters represent Vyasadeva. Therefore, on their appearance days, the disciples arrange a Vyasa Puja for their initiating spiritual master. His Divine Grace Srila Prabhupada Bhaktisiddhanta Saraswati Thakur is the prominent personality in the Brahma-Madhava-Gaudiya-sarasvata parampara as he systematically spread the pure loving message of Lord Caitanya, establishing a non-sectarian society in the name of Gaudiya Math. According to the desire of Lord Caitanya, Srila Prabhupada’s disciples, grand disciples, and great-grand disciples established so many units of Mahaprabhu’s mission for the sake of massively spreading the message of Lord Caitanya with non-sectarian and non-judgmental mood.

In order to establish non-sectarian and non-judgmental mood in Lord Chaitanya Mission, Srila Prabhupada taught us to arrange the Vyasa Puja as follows: