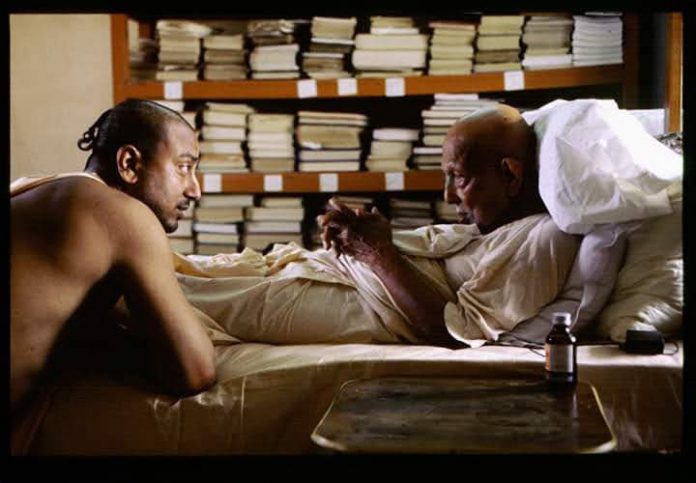 On 18 October 1898, one of the universal forms of truth appeared during the festive season of Navaratri celebrations, on the fourth day of the waxing moon (Gaur Chaturthi). In the village of Ganganandapur Jessore district, presently in Bangladesh territory appeared the divine child, Pramode Bhushan, in an orthodox brahmin family. This divine child gradually grew up under the guidance of one of Srila Bhaktivinoda Thakur’s godbrothers, Sri Bhaktiratna Thakur. In 1915, according to the inspiration of Bhaktiratna Thakur, Pramode Bhushan met his Guru, Bimala Prasad, in Mayapur, at the present-day Sri Chaitanya Math. It was the day that Srila Gaur Kishore Das Babaji Maharaj departed from this mortal world. During the meeting, he saw an effulgent form, a tall white-robed brahmachari with a grave voice. As soon as Pramode Bhushan saw that divine form, he felt an eternal connection and decided to accept him as his Sri Guru. Pramode Bhushan got the chance to meet Bimala Prasad and spent one night with him at Sri Chaitanya Math. During that time, they had the chance to have a personal conversation and then Pramode Bhushan came to know that Bimala Prasad is the son of Srila Bhaktivinoda Thakura. Pramode Bhushan’s heart was stirred and he felt a desire to take shelter of Bimala Prasad. Now, his inner feeling upon first seeing Bimala Prasad, combined with Bhaktiratna Thakur’s inspiration confirmed to Pramode Bhushan that in the near future, he will accept initiation from this divine effulgent personality, Bimala Prasad.

In 1917, Promode Bhushangot the chance to meet Bimala Prasad for the second time, at the Yogapith Temple. In 1919, he again met the divine personality at No. 1 Ultadanga Junction Road, Kolkota. This time, Bimala Prasad was the monk, Srila Bhaktisiddhanta Saraswati Thakur; in short, everyone called him Srila Prabhupada. Every day, Srila Prabhupada used to give discourses in the afternoon time on the Srimad Bhagavatam and Pramode Bhushan would attend the daily discourses. Once in 1921, Pramode Bhushan was bitten by a scorpion while attending to a discourse. Despite the severe pain, he still attended the discourse. After the discourse was over, Srila Prabhupada came to know and advised him to stay in the temple and asked him to simultaneously continue his job at the port commission.

On the day of Sri Krishna Janmastami 1924, Srila Prabhupada mercifully gave initiation to Pramode Bhushan and awarded him the name, Pranavananda Das Brahmachari. From that day, he gave up his job at port commission and completely and wholeheartedly dedicated himself in the service of his Guru. Srila Prabhupada kept Pranavananda Brahmachari under his loving service as ‘editor’ till his last breath. On the day of Amalaki Ekadashi, 1947 during the time of Navadwip Dham Parikrama, Pranavananda Brahmachari took the renounced order of life (sannyäsa) from his god-brother, Srila Bhakti Gaurav Vaikhanash Goswami Maharaja, at Champahati Gaur Gadadhar Temple, Rtudwip, which is one of the island of Nabadwip. After the sannyäsa ceremony, he was given the name “Bhakti Pramode Puri Goswami”.

As per our earlier discussion, Sri Guru means the one who is teaching us how to
serve Sri Krishna according to the direction of Srimati Radharani. In order to teach how to serve Sri Krishna under the guidance of Srimati Radharani, Srila Bhakti Pramode Puri Goswami Thakur established Sri Gopinath Gaudiya Math in 1989 at Sri Dham Mayapur, Ishodyan. According to the desire of Srila Prabhupada, the branches of Sri Gopinath Gaudiya started expanding at various holy places, including Sri Jagannath Puri and Sri Dham Vrindavan.

On the advent day of my beloved spiritual master, I humbly pray to all the members of the parampara and the divine couple Sri Sri Radha Krishna, to please encourage us to follow the aforementioned last instruction of Srila Prabhupada sincerely. In fact, Gaudiya means one who is following in the footsteps of Srimati Radharani. I would like to establish Gaudiya Vaishnava Philosophy in my heart and in the entire Gaudiya community and wish everyone to go back to the eternal home, together. We know from Vaishnava scriptures that the Lord fulfills the desire of the pure devotees. My spiritual master, His Divine Grace Srila Bhakti Pramode Puri Goswami Thakur is a pure devotee, a self-realized personality. His eternal identity is Palash Manjari. I pray to my spiritual master as well as to all the pure devotees to pray for me and fulfill my ultimate desire to attain the eternal service of Sri Sri Radha Gopinath in Goloka Vrindavan.