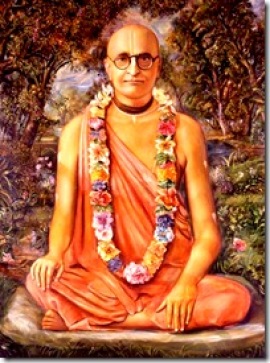 (I humbly offer my obeisance to Saraswati Prabhu (Srila Prabhupada Bhaktisiddhanta Saraswati Goswami Thakur) who imparted to us the glories of Sri Gauranga and Sri Krishna’s Holy Name and expanded Their kirtan for delivering the atheists.)

It was Friday 6 February 1874, on the auspicious 5th waning moon cycle during the winter season of the Magha month of the Vedic calendar, when in the holy land of India, in Jagannath Puri Dham, an effulgence newborn baby boy appeared to father Kedarnath Dutta and mother Bhagavati Devi. At the time, by the selection of British government, Kedarnath Dutta was holding the post of deputy magistrate of the Puri district in Orissa province along with the post of superintend of the world famous Lord Jagganath Deva temple. Father Kedarnath Dutta, later known and revered as Srila Bhakti Vinode Thakur, choose the name “Bimala Prasad” for the newborn baby boy.

At the time of the birth, the baby Bimala Prasad’s body was wrapped with an umbilical cord in such a way that it looked like the boy was wearing a Brahmin thread. Moreover, a famous astrologer read the baby’s astrological chart and based on its ascendant declared that Bimala Prasad would spread the loving message of the Supreme Lord from the Purushottam Dham, according to the message of Padma-Puran—“Hrutkale Purushottamat.” Jagannath Puri Dham is also known as Purushottam Dham or Keshtra-Dham and the messages of Padma Puran combined with the baby’s ascendant were indications that this child was going to fulfill those predictions in the future.

Gradually the astrological predictions began to become manifest. In order to establish preaching centers for the propagation of the loving message of Sri Krishna Chaitanya Mahaprabhu, Bimala Prasad took a vow to chant 192 rounds (three lakhs) of the Holy Name everyday, as he wanted to recite the Hare Krishna Maha-mantra one billion times. It took almost nine years to complete these numbers. During the period when Bimala Prasad performed this one billion Nam-Yagna, Srila Bhaktivinode Thakur and Srila Gaur-Kishore Das Babaji Maharaj, both spiritual shelters to Bimala Prasad, departed from this world in 1914 and 1915 respectively. Out of their separation, Bimala Prasad felt a lack of shelter and therefore decided not to establish any preaching centers and simply to continue to chant the 192-rounds of the Holy Name every day for the rest of his life.

Then, one very early morning Sri Krishna Chaitanya Mahaprabhu’s associates appeared before Bimala Prasad and told him: “You should change your mind and progress to propagate the loving message of Mahaprabhu.” Bimala Prasad responded to them all by asking: “But, where is my manpower?” After hearing Bimala Prasad’s query, Sriman Mahaprabhu’s associates said that they would send him the necessary manpower. After this incident, gradually messengers of Sriman Mahaprabhu appeared in Bimala Prasad’s life, including: Paramananda Vidyavinode, Srila Bhakti Pradip Tirtha Goswami Maharaj, Kunja Bihari Vidyabhusan, Sundarananda Vidyavinode, Vinode Bihari Prabhu (also known as Vinode Da), Pranavananda Das Brahmachari (after Sanyas became Bhakti Pramode Puri Goswami Thakur) and others. According to the wish of Sri Krishna Chaitanya Mahaprabhu, Bimala Prasad now felt the inspiration to establish preaching centers for spreading the loving message of Mahaprabhu.

In this age of hypocrisy (Kali-Yuga), in order to distribute Divine Love to everyone without discrimination between cast and creed, the Supreme Personality of Godhead, Sri Krishna, appeared in the form of Sriman Mahaprabhu, took the renounced order of life (Sanyas), and became known as Sri Krishna Chaitanya.

In 1918, on the day of Sriman Mahaprabhu’s appearance day, Bimala Prasad also took the Sanyas initiation and established a parent center for the entire Sri Gaudiya Math in the name of “Sri Chaitanya Math” in Mayapur, Nadia, West Bengal. Upon taking Sanyas, Bimala Prasad changed the color of his cloth from white to saffron and was given the name: “Bhakti Siddhanta Saraswati.” He went on to establish 64 preaching centers in the name of the Gaudiya Math during his entire preaching life.

Most Vaishnavas scholars saw the enthusiasm with which Bhakti Siddhanta Saraswati was fulfilling the desires of Mahaprabhu. All of them out of their happiness decided to add the honorable Vaishnava title “Srila Prabhupada” to his name. Therefore, after the Sanyas ceremony, Bimala Prasada’s complete name became: “Srila Prabhupada Bhakti Siddhanta Saraswati Goswami Thakur.”

As per scriptural instruction, disciples are not supposed to utter their Gurudeva’s name in full at all times. Therefore, in time his disciples started to call him Srila Prabhupada, instead of his full name.

Literally, the word “Prabhupada” can be divided into two parts: “Prabhu,” means “Lord” and “Pada” means “feet.” In order to honor the Lordʼs Feet, the ornamental word, “lotus” is used in glorification. In the Vaishnava tradition, devotees describe the feet of their Lord as “Lotus-feet.” Groups of different faiths use the word “Prabhu” to refer to their object of faith and amongst Gaudiya Vaishnava devotees, the use of “Prabhu” is to indicate to Sri Krishna Chaitanya Mahaprabhu. To Gaudiya Vaishnava devotees, the inner meaning of “Prabhupada” exemplifies the manner in which the loving message of Sri Krishna Chaitanya Mahaprabhu is carried out, as another meaning of the title refers to one who is fully surrendered to spreading the loving message of Mahaprabhu with integrity.

According to the history of the Gaudiya Vaishnava lineage, most of the members the Brahma-Madhva-Gaudiya-Saraswata-Sampradaya, out of humility and in order to offer sound respect to their Spiritual Master, His Divine Grace Srila Bhakti Siddhanta Saraswati Goswami Thakur Prabhupada, decided not to use the title Prabhupada for their own names. Still, it is true that all pure devotees who carry the loving message of Sri Krishna Chaitanya Mahaprabhu with integrity in the Gaudiya Vaishnava tradition are eligible to use the title “Prabhupada” with their names.

According to scriptural instructions, those who take the renounced order and spread the pure devotional message by example, that person is eligible to be a child of Sriman Mahaprabhu. Similarly, we can say that Srila Prabhupada was a son of Mahaprabhu.

On 1 January 1937 at 5.30 a.m, Srila Prabhupada physically passed away from this world while staying at the Gaudiya Math center at Bag Bazar, Kolkata. A few days before his physical departure, he gave the following instructions to his true followers: “All of you, together under one shelter (Srimati Radharani), propagate the messages of Sri Rupa Goswami and Sri Raghunatha Goswami with full of enthusiasm.” Furthermore, Srila Prabhupada gave instruction to his intimate disciples to establish more centers to expand Mahaprabhu’s mission all over the world and keep amicable relation amongst each other. As a result, we have seen the founding of various Maths:

Nowadays, many other centers appear in different names and are founded with the objective to spread the loving message of Sri Chaitanya Mahaprabhu and to get the blessings from Srila Prabhupada, the followers of the Gaudiya Math, and ISKCON.

In conclusion, my humble request to all readers: According to your capacity, please prepare yourself to propagate the loving messages of Sriman Mahaprabhu by practicing by example and making your rare human life become successful and full of happiness, in His service.