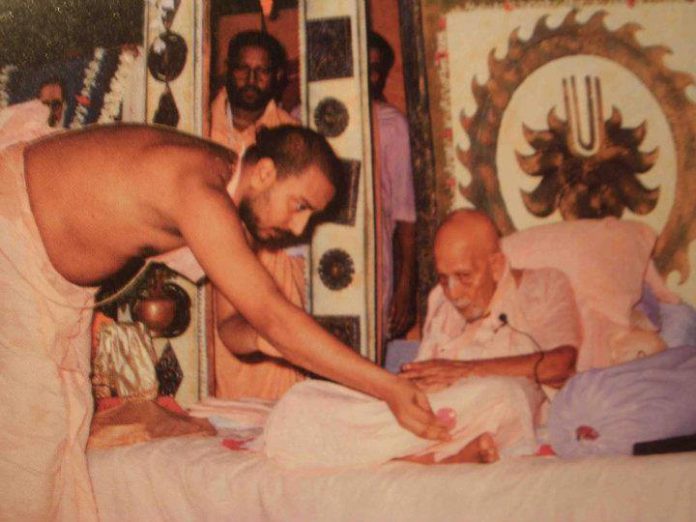 Once, the founder acharya of Sri Gopinath Gaudiya Math, His Divine Grace Srila Bhakti Pramode Puri Goswami Thakur, was explaining the Absolute Truth of Sri Sri Radha Krishna. He explained how Radha and Krishna are in reality one Absolute Truth that expanded for the purpose of performing pastimes. When one hears about the rasa-lila, one may not understand at first, how Krishna can enjoy pastimes with all the gopis. Usually, the mundane people think that this is all material. Srila Gurudeva then explained the aphorism from the Vedanta-sutras, which elucidate that there is no difference between the energy and the possessor of the energy (çakti-çaktimator-abhedah). Srimati Radharani is the pleasure potency of Sri Krishna. The possessor of the energy cannot function without the energy. Thus, Krishna is enjoying with His own self (svarupa-çakti) in the rasa-lila.

From the Brahma Vaivarta Purana, we know that without the mercy of Srimati Radharani, nobody can attain the mercy of Krishna (satyam satyam punah satyam satyam eva punah puna: binä radhä-prasädena mat-prasado na vidyate). Krishna explains repeatedly that without Radharani’s mercy, no one can obtain His mercy; this is the truth.

On another occassion, Srila Gurudeva HDG Srila Puri Goswami Thakur explained that Radharani expanded from the left side of Krishna and all the sakhis expanded from Radharani. All the manjaris expanded from the sakhis. Originally, the source of all is Sri Krishna. Even all the souls in this world are tiny fire sparks that have emanated from Krishna. According to the Caitanya Caritamrta, ekale içvara Kåñëa ara saba bhrtya, jare yaiche nacaya se taiche kare nrtya – Krishna is the one and only enjoyer; everybody dances according to the way in which He makes them dance. The purport is that in reality, everyone is a servant of Krishna.

People may think that Brahma is the creator; how can Brahma be considered a living entity (jéva)? Actually, Brahma is the most elevated living entity. We know from the sastra that Brahma is the incarnation of the mode of passion (rajo-guna). In this material planet, we all, more or less, make mistakes. We know from the Srimad Bhagavatam that once Lord Brahma made a mistake, thinking Krishna to be just an ordinary cowherd boy. Lord Brahma kidnapped all the other cowherd boys and calves and kept them in Sumeru cave of Vrindavan to test if Krishna is really supreme or not. Finally, after one year, when Lord Brahma saw that Krishna expanded Himself into all the kidnapped cowherd boys and calves and that they were going about their daily lives as normal in Vrindavan, he was surprised because the boys and calves whom he had kidnapped were still in the cave. Thus Lord Brahma understood that Krishna is supreme. The Supreme Lord never makes mistakes but Brahma being a living entity, he made a mistake.

Actually, this was the desire of the Supreme Lord Krishna in order to destroy the false ego of Brahma and to fulfill the wishes of the gopis and cows. The gopis had the desire to feed Krishna by their hands and the cows wanted to feed milk to Krishna from their udders. Therefore, we see how Krishna made Brahma act in such a way to achieve the two-fold purpose. Also, Krishna bound Brahma to come down in the Kali-yuga for assisting Him while Lord Krishna would be in the form of Lord Chaitanya. Lord Krishna in the form of Lord Chaitanya was spreading the sankirtan movement. At that time, Brahma appeared in the form of Haridas Thakur and glorified the Holy Name in every step of his life.

When one is completely free from material attachments, then one can enter Vrindavan, the place of the rasa dance. Srila Narottama Thakur says, visaya chadiya kabe suddha häbe mana, kabe häma heraba sri vrindavan – when will my mind be free from the objects of material sense enjoyment and thereby, become purified to see Sri Vrindavan? All living beings are eligible to enter Vrindavan when they get intense greed (laulya – lalasa), which will come only by the mercy of the Spiritual Master and Krishna. This greed cannot be achieved even from the pious merits gained over tens of millions of births. Srila Rupa Goswami writes:

Translation: If one desires to purchase the ecstatic mood of devotion to Krishna, then there is only one price for that, which is intense greed. This devotion cannot be attained even through the results of pious activities (punya) performed over tens of millions of births.

My spiritual master, His Divine Grace Srila Bhakti Pramode Puri Goswami Thakur, was physically in the material world but was constantly residing in Vrindavan in spirit due to his intense greed. Therefore, he left his physical form on the day before the Maha Rasa known as Gaura Chaturdasi at 2:10 AM (the 14th day of the waxing moon cycle in the month of Kartik). It is at this time that Maha Rasa is manifested in the divine Goloka Vrindavan. He left on that day so that he would enter into the Maha Rasa-lila. Srila Gurudeva was an exemplary personality showing us how to get the qualification of laulya, which is obtainable only through the mercy of Guru and Krishna.