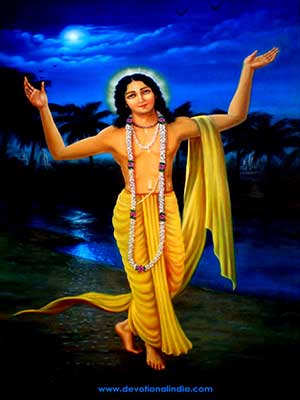 “In Kali yuga, people with proper understanding will perform congregational chanting to worship the incarnation of God who constantly sings the names of Kṛṣṇa. Although His complexion is not black, He is Kṛṣṇa Himself. He is complete with His limbs, devotees, weapons and companions as follows.”

Here, this is clear evidence that there will be someone who will initiate the congregational chanting of Hari and this personality will be Hari himself. Another point to note is that his color is not black indicating the appearance of Sri Caitanya Mahaprabhu, who has a golden complexion.

“Hari Himself, in a effulgent golden form, is intoxicated with His own Name and distributing to the masses the super-excellent devotional mood, madhura-rasa. He is distributing it to whoever desires it. May that Lord, Sri Sachi Nandan, reveal Himself in your heart.”

Therefore, this golden complexion personality who is known as Sri Krsna Caitanya or Sri Caitanya Mahaprabhu started the Krsna consciousness movement which has today grown to worldwide proportions.