His Divine Grace Srila Bhakti Pramode Puri Goswami Thakur appeared on this earth at Ganganandapur village, Jessore district, which is presently named Bangladesh, on the 18th of October, 1898. From the very beginning he exhibited spontaneous attraction for The Supreme Personality of Godhead Lord Sri Krishna. His father’s name was Tarini Charan Chakraborty and his mother’s name was Ramrangini Devi. He appeared in a strict Brahmin family and followed the path of devotion as a young child by the influence of his neighbor Srila Bhakti Ratna Thakur, the Godbrother of HDG Srila Sacchidananda Bhakti Vinode Thakur. As per the instruction of Srila Bhakti Ratna Thakur, he worshiped Sri Sri Radha Madan Mohan and was encouraged to take shelter of the founder president of all Gaudiya Maths and branches around the world, His Divine Grace Srila Bhakti Siddhanta Saraswati Goswami Thakur Prabhupada. 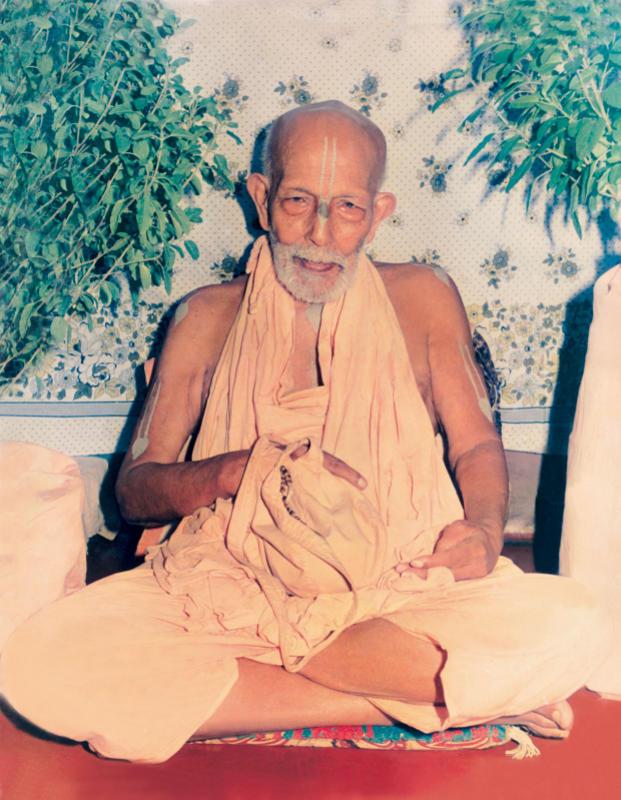 In this way, Pramode Bhusan continued from 1921 to 1923 and simultaneously provided financial support to his family in Ganganandapur, Bangladesh. On the auspicious day of Sri Krishna Janmastami in 1923, Srila Prabhupada approached Pramode Bhusan and said, “Today I would like to give you initiation. Also, today you must quit your office job and fully engage your time in my publication department.” Pramode Bhusan became overwhelmed with joy and without reservation accepted first and second initiation along with saffron dress, all on the same day. He was given the name Pranabananda Das Bramhachari. After initiation Srila Prabhupada gave a fountain pen to Pranabananda Das Bramhachari and told him to use the pen in his service from that day forward. From that day on, Srila Prabhupada kept Pranabananda Das Bramhachari near him at all times so that he could dictate new articles for the purpose of publication. Due to this most important service of Pranabananda Das Bramachari we are able to read Srila Prabhupada’s articles and books. Nowadays these books are still available in Gaudiya Math at Bag-Bazar, Kolkata and Sri Chaitanya Math at Mayapur. Due to his humility, he never allowed his name to be printed inside any of these books.

In 1926, he was put in charge of running Bengal’s only daily Vaisnava newsletter, the “Dainik Nadiya Prakash”. He continued this service for three years, publishing all of his preceptor’s daily discourses along with articles by fellow students and other contemporaries. At this time all books, magazines, and newsletters were all created manually. In response to the sincerity and hard work of Pranabananda, Srila Prabhupada awarded him the title Maha-Mahopadesaka and Pratna-Vidyalankar.

In 1942, Srila Prabhupada appeared to Pranabananda in a dream and imparted to him the sannyas mantra, ordering him to accept the renounced order. Five years after this transcendental dream in 1947, he took the vow of Sanyassa from His Godbrother, Srila Bhakti Gourav Baikhanas Maharaj at Gour-Gadadhara temple in Champahati with the help of Sat-Prasanga-Nanda Das Brahmachari, who after taking Babaji initiation (from Srila Bhakti Pramode Puri Goswami Maharaj) was known as Srila Nayananandadas Babaji Maharaj.

After the disappearance of Srila Prabhupada, Pranavananda Das Brahmachari continued his service of spreading the teachings of Sri Chaitanya Mahaprabhu through the Gaudiya Magazine, at first out of the Bagh Bazar Gaudiya Math, then out of Yogapith temple, the birth place of Sri Chaitanya Mahaprabhu at Mayapur. He was also engaged as temple president of Yogapith temple for almost seven years, as per the order of his senior Godbrother, Kunja-Babu.

After the seven years of service to Yogapith temple he relocated to Kalna, a Holy place where Gouridas Pandit and Suryadas Pandit, intimate associates of Sri Chaitanya Mahaprabhu, manifested their pastimes with Hriday-Chaitanya Prabhu at bank of the Ganga River. Remembering all these pastimes, HDG Srila Bhakti Pramode Puri Goswami Thakur stayed on the bank of the river Ganga at Kalna in a small kutir, worshiping his home Deity for the next three years. The King of Burdwan was extremely impressed by his saintly character, and in 1958 the king offered HDG Srila Bhakti Pramode Puri Goswami Thakur the three hundred year old Temple of Sri Ananta Vasudeva at Kalna.

HDG Srila Bhakti Pramode Puri Goswami Thakur had outstanding love for his God brothers and was inspired in his glorification to other Vaishnavas. He found richness in everyone he met. He had the quality of making one feel so much wanted and their life so much valued. At the same time, he paid the least attention to himself. He was an emblem of humility and simplicity, and his generosity of spirit and kindness touched the hearts of the whole Vaishnava community. HDG Srila Bhakti Pramode Puri Goswami Thakur set the example throughout his life how one can manifest the actual mood of how to be more humble than a blade of grass, more tolerant than a tree, and to be always ready to offer all respects to others regardless of their background. We are greatly indebted to HDG Srila Bhakti Pramode Puri Goswami Thakur for his lifetime of pure devotion, spanning over a century, which we can aspire for, learn from, and discuss for our own spiritual nourishment.

HDG Srila Bhakti Pramode Puri Goswami Thakur departed this world for the eternal abode in the predawn hours of Narayana Chaturdasi, October 21, 1999, one day before Rasa Purnima. His divine body was transported from Jagannatha Puri to the Gopinatha Gaudiya Matha in Ishodyan Sri Dham Mayapur and there he was placed in his eternal samadhi Mandir. Prior to his departure from this world, HDG Srila Bhakti Pramode Puri Goswami Thakur appointed his intimate disciple, HDG Srila Bhakti Bibudha Bodhayan Maharaj as his successor to Sri Gopinatha Gaudiya Matha for the purpose of carrying on his instruction to spread the message of Sri Chaitanya Mahaprabhu around the world.

In the years to come, as more of his words and visions are translated, the world outside of Bengal and India will come to know the spirit of the true Vaishnava religion that he tirelessly made available through his editing and publishing service. May the gentle rain of nectar of his perfect teachings continue to bring auspiciousness into this world.