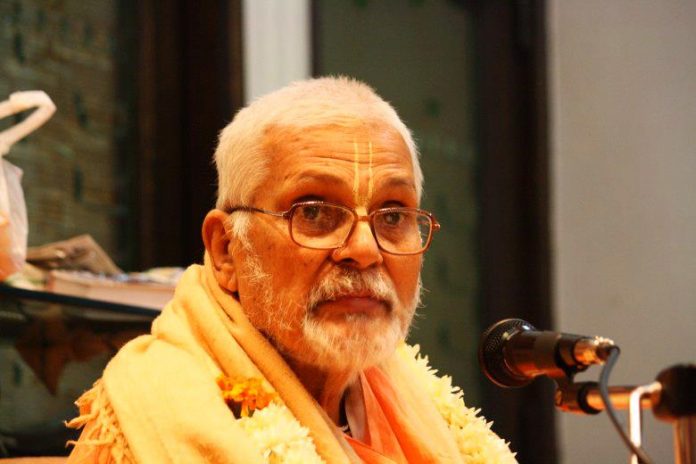 Srila Bharati Maharaj physically left us on the 5th of September 2017, at 12.28 p.m., in Faridabad (near Delhi, India). This day is known as the 14th day of the waxing moon cycle and is also the disappearance day of Srila Nama-Acharya Haridas Thakur.

At another time, while Srila Bharati Maharaj was at my grandfather’s home; my Spiritual Master instructed me to go and stay with him in the temple as his personal servant. Due to my material attachment, I felt reluctant to live in the temple forever. However, as soon as Srila Bharati Maharaj heard about my Spiritual Master’s instruction, he asked me when I was going to come to the SCGM in Kolkata to serve my Spiritual Master. He also said, “We are all protected by Krishna. When we surrender completely, Krishna will arrange that which is necessary for us. Once we believe this from the bottom of our hearts, we will be able to realize that this is a fact.”

I was astounded to hear these words from him, It was as though he could perceive my inner feeling about living in the temple. His words touched my heart, and I decided not to dwell on the necessary requirements for my existence. After seven days, I left home to live in the temple and began my Brahmachari life as the personal servant of my Spiritual Master. I feel forever indebted to Srila Bharati Maharaj, as it was his inspiration that allowed me to renounce my life at home and join the temple.

Another incident that comes to mind took place at the foundation stone ceremony for Sri Gopinath Gaudiya Math in Mayapur. It was agreed that my Spiritual Master would personally perform the ceremony. However, our Gopinath Das Babaji Maharaj’s grandmother expired unexpectedly, and Srila Gurudeva was requested by her family members to attend the condolence ceremony at their home in Amta, a town in Howrah, West Bengal. Out of affection for Babaji Maharaj’s family members, Srila Gurudeva decided to go Amta, and appointed Srila Bharati Maharaj to preside the ceremony in Mayapur in his place. Thus, our first building foundation stone ceremony in Mayapur was presided by Srila Bharati Maharaj.

When we had decided to build a temple for our Mayapur Deities; I was feeling reluctant to start construction due to a lack of funds. At that time, Srila Bharati Maharaj visited our Mayapur temple and I asked his opinion about our desires and financial situation. Srila Bharati Maharaj replied that “We are soldiers of Mahaprabhu’s Mission. You should not feel fear at all. Srila Puri Goswami Maharaj is one of the dearest devotees of Sri Sri Radha Gopinath; Their Lordships will arrange all requirements for Their devotee’s happiness”. With time, I realized the truth in Srila Bharati Maharaj’s words and advice.

During the last Karthik, Srila Bharati Maharaj mercifully allowed us to host him at our Vrindavan temple. Each day, early in the morning, before starting our Vrindavan Parikrama, I would go to his room to offer my obeisance. By doing so I felt blessed and inspired to conduct our temple’s first official Vrindavan Dham Parikrama.

Two years ago, Srila Bharati Maharaj expressed his desire to arrange for some land in Mayapur for his Samadhi. At that time, Maharaj’s devotees had spent significant funds for his (Srila Maharaj) small centre in Jagannath Puri and I told Maharaj that I did not have enough money to buy a land in Mayapur, but I am sure that the funds will be arranged as the Supreme Lord is always fulfilling His devotees’ desires. Earlier this year, during the Gaur-Purnima festival, Srila Bharati Maharaj’s Mayapur Math was established. And now, only six months later, his Samadhi ceremony is taking place at his Mayapur temple. It seems like – the Supreme Lord is arranging everything according to the desire of His pure devotee.

In conclusion, I must admit that, after my Gurudeva’s disappearance, whenever we needed any advice on how to conduct our temple affairs properly, Srila Bharati Maharaj always willingly provided guidance to the best of his ability. Today, on behalf of Sri Gopinath Gaudiya Math’s devotees, I am humbly requesting His Divine Grace Srila Bhakti Vijnana Bharati Goswami Maharaj to please bestow your mercy upon us all and enable us to carry forward Mahaprabhu’s loving mission with a non-sectarian, non-judgmental mood, under the shelter of our lineage for the rest of our lives. Also, please excuse all of us, if knowingly or unknowingly our Sri Gopinath Gaudiya Math’s devotees and myself have committed any offenses. In spirit, please continue to help us in developing our devotional practices as before.