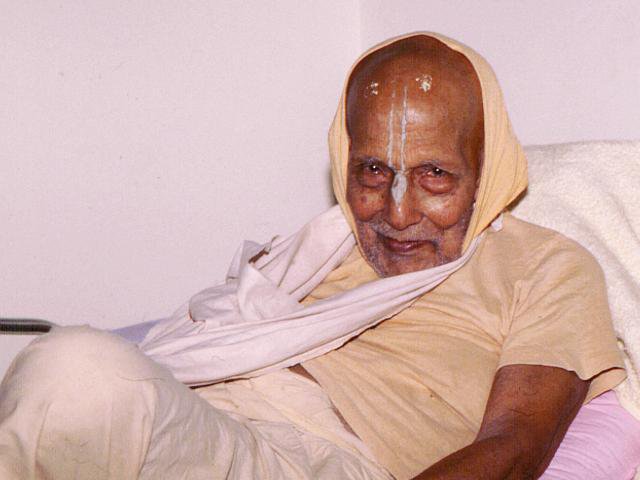 108 Sri Srimad Bhakti Pramode Puri Goswami Thakura who has entered back into the eternal pastimes of Sri Sri Radha Krishna was the founder of Sri Gopinath Gaudiya Math, located in Sridhama Mayapur. When looking at his life starting from birth, initiation (diksa), and various other incidents of his life on this planet, we can see notice the love that Srila Gurudeva had for the mother.

Sri Golokavihari Krishna is the Supreme Lord of the unlimited number of universes. We see from the Sri Caitanya-Caritamrta –

Sri Durga Devi is a representative form of Srimati Radharani. From Sri Brahma perspective given in the Sri Brahma-Samhita, Sri Durga Devi is described as the shadow of Srimati Radharani. Worship of Sri Durga Devi happens with great pomp during the nine-day festival (nava-ratra) celebrated by Bengalis and other Indians. Srila Bhakti Pramode Puri Goswami Thakur appeared on mother Earth as the son of
Tarinicarana Chakravati (father) and Sri Ramarangini Devi (mother) in Ganganandapur situated in present day Jessore, Bangladesh during the early morning hours of the fourth day of this nine-day festival (caturthi). After being born, the parents lovingly named their son as Pramode Bhushan Chakravarti.

Brahma has written in regards to Durga Devi –

In other words, through the desire of Srimati Radharani, the internal potency of the Supreme Lord, Sri Krishna (who is also known as Govinda), Sri Durga Devi (who is Srimati Radharani’s shadow) conducts the creation, maintenance and destruction of the material world. Brahma serves this Supreme Lord, Govinda, at every moment.

In regards to this point, the Padma-Purana informs us –

The Supreme Lord, Sri Krishna, is the object of worship of everyone. In accordance with the conclusions of the scriptures, in the Kali-yuga, Sri Krishna Caitanya Mahaprabhu, taking upon the mood and complexion of Srimati Radharani, descended into the material world along with His personal associates. Srila Bhaktisiddhanta Sarasvati Gosvami Thakura Prabhupada is the personified condensed form of Sri Krishna Caitanya Mahaprabhu who possesses the mood and complexion of Srimati Radharani. In the spiritual world, Srila Prabhupada Bhaktisiddhanta is Nayanamani Manjari who possesses a golden complexion, wears blue garments which are ornamented with stars, and serves Sri Sri Radha Krishna by singing for Them. The eternal maidservant of Sri Nayanamani Manjari is Sri Palasa Manjari. In the spiritual world, Sri Palasa Manjari is eternally 12 years old, has a golden complexion, wears yellowish-red
clothes and serves Sri Sri Radha Krishna by plucking flowers for various services. In order to assist Sri Nayanamani Manjari in Her service of singing, Sri Palasa Manjari appeared on earth on 19th October 1898 (2nd Kartik 1305 according to the Bengali calendar) during the midst of the nine day nava-ratra festival.

Siva, Ganesa, and Kartika are part of Mother Durga’s family. We know that Mother Durga’s vehicle is the lion who is the king of all animals. Lord Siva’s vehicle is the bull and on his neck resides the snake, Anantanaga Sesa Sankarsana who is the spiritual master (gurudeva). Ganesa’s vehicle is the mouse and Kartika’s vehicle is the peacock. Shrewd persons analyze and understand that although the vehicles of all of the members of this family normally would be food for one another, they seem to be cooperating in a
unified manner. For example, the bull is the lion’s food. The mouse is the snake’s food. The snake is the peacock’s food. In reality, Mother Durga and Lord Siva are pure devotees of the Lord; Mother Durga is a vaishnavi and Lord Siva is the supreme devotee, parama-vaishnava. Since all of the members of this family chant the holy names of Krishna in utmost bliss, there is no unrest within their family. Pramode Bhushan who is the form of personified peace took birth as the mercy of Siva and Durga in the midst of
the nine-day nava-ratra festival. Sri Pramode Bhushan’s neighbor was Srila Bhaktiratna Thakura who was a godbrother of Srila Bhaktivinoda Thakura. Srila Bhaktivinoda Thakura would come to visit Srila Bhaktiratna Thakura, from time to time, with very important services. Due to this situation, by his good fortune, Pramode Bhushan had the opportunity to meet Srila Bhaktivinoda Thakura. Gradually, through the mercy of Bhaktiratna Thakura, Pramode Bhushan got the opportunity to begin studying the books of Srila Bhaktivinoda Thakura. Srila Bhaktivinoda Thakura disappeared in 1914. Thereafter, through the inspiration of Bhaktiratna Thakura, Pramode Bhushan went to meet Bimala Prasada Prabhu in Mayapur in 1915; it happened to be the day of Gaura Kisora Dasa Babaji Maharaja’s disappearance pastime. It was as if Srimati Radharani personally inspired Palasa Manjari in order to go and help Nayanamani Manjari in Her service of singing. Upon seeing Bimala Prasada Prabhu, Pramode Bhushan accepted him as his guru within his mind. However, service to Krishna is done through the desire of Srimati Radharani. Thus, through the desire of Srimati Radharani, Bimala Prasada was present at the Yogapitha (the
courtyard of Mother Saci), engaged in extremely austere penance in the year 1917. During that time, Pramode Bhushan came one day to meet Sri Bimala Prasada, again. In Bengali culture, it is a norm that when a guest arrives in the afternoon, he is to be fed. However, there was nothing left of that afternoon’s prasada. Srimati Bhagavati Devi, the mother of Sri Bimala Prasada, was living at the Yogapitha temple at that time. Thinking it improper for Pramode Bhushan to remain unfed having arrived in the afternoon, Srimati Bhagavati Devi personally cooked, offered the food to the Lord according to the spiritual practice and served the prasada to Pramode Bhushan. We know that another name of Mother Durga is Bhagavati Devi. Here, if we analyze with internal vision, it seems that Mother Durga, taking the form of Bimala Prasada’s mother, Bhagavati Devi, personally cooked and fed Pramode Bhushan.

Thereafter, from the year 1921 onwards, Pramode Bhushan began living the life of a renounced person. Just a few days earlier, Bimala Prasada had been awarded the title, “Srila Prabhupada” and became the object of respect for the entire world. On Janmastami day in the year 1923, Srila Prabhupada bestowed mantra-diksa (initiation) upon Pramode Bhushan and named him Pranavananda Dasa Brahmacari. The affection that Pranavananda Prabhu’s mother, Ramarangini Devi, had for him was astonishing. From time to time, Mother Ramarangini Devi would send letters to Pranavananda from home. Srila Prabhupada would first read the letters and then would say in front of everyone, “Reading the way in which Pranavananda’s mother has written her letters, I feel like crying, myself. If Pranavananda reads the letters, then what can happen? If Pranavananda reads the letters, I cannot fathom what will happen.”

Pranavananda Dasa Brahmachari attracted the love and affection of Srila Prabhupada (Nayanamani Manjari), of Mother Durga, of Srimati Bhagavati Devi (the mother of Bimala Prasada) and of his own mother, Ramarangini Devi. This shows us that Pranavananda Prabhu’s, or in other words, Srila
Gurudeva’s real identity is one of love for the mother.

I have seen with my own eyes and have heard with my own ears that whenever a small girl or a woman would come to Srila Gurudeva, he would call all of them as Mother (Ma). If we in the vaisnava world could follow even a tiny fraction of the example practiced by Srila Gurudeva, especially in how he viewed women, then we would most definitely be able to be cut away our material desires and become established in attachment for serving Sri Krishna as instructed by Sri Krishna Caitanya Mahaprabhu. If we become able to let go of the idea of being the doer (ahamkara) and establish this attachment to serving
Sri Krishna in our hearts, minds and intelligences (chitta), then our spiritual lives will become perfect. In other words, we will be able to become delivered from the material world and become the servants of
Srimati Radharani’s sakhis in the form of manjaris, just like our spiritual masters, in the spiritual world.

“dhāmera svarūpa, sphuribe nayane, haibe rādhāra dāsī”
In other words, the supreme wealth and goal (paramartha) is the good fortune of being the servant of Srimati Radharani in Goloka Dhama.