On the evening of May 2nd, heavy rains began in Jagannath Puri. All mobile networks started to go inactive and no contact was able to be established with anybody through the phone.

The devotees in the math, which is situated on the seashore, began to move many hundreds of kilos of rice from the basement to the top floor of the temple building so that they would not get destroyed in the cyclone due to flooding.

They were in a dilemma in regards to if the deities should be moved upstairs or not but nobody was sure as to what the conditions would be during the cyclone. The deities remained in the thakur-ghar (diety room).

On the morning of May 3rd, mangal arati and parikrama were conducted as normal. At about 5:30 am, all power was cut off in Puri. After temple prayers and the morning program, the devotees began to notice that the ocean was engulfing the beach sand. This was at 7 am and the storm had not begun as of yet; however, the ocean was looking violent, already.

The cows were moved into the white guesthouse building ground floor and all the temple doors were shut and bound with ropes. At 7:30 am, the wind started picking up to very high speeds and by about 8 am, the glass windows began shattering on the top floor of the temple. The thakur-ghar (diety room) was closed. The white guesthouse began shaking and the ocean was coming closer and closer to the temple. By about 8:30 am, the wind was so fast that coconut trees seemed to be falling over. There was nowhere to go except into a corner bedroom to the right of the Thakur-ghar (diety room). The wind was so fast that the entire outdoor kitchen set up blew away. Tin roofs were flying in the air and were destroyed. Windows were slamming open and close and the glass on the windows were constantly shattering and flying into the temple hall.

Water was flowing into the temple through the side door and the basement prasadam hall and rooms were getting flooded. Some devotees tasted the water and it was salty which confirmed that sea water was indeed entering the temple, already.

This all seemed to be manageable to some extent but then, all of a sudden, the huge wooden doors of the temple hall literally burst open. Rainwater and seawater were literally flying through the temple doors. The temple hall began flooding, rapidly. Nothing could be seen except for a huge gust of water gushing through the temple doors along with glass flying about. The chandeliers were shaking and breaking and parts were falling from the ceiling. Some devotees tried to close the doors by pushing against the 200 km/h speed winds but as soon as they got close to latching the door shut, they burst open again.

Some devotee was injured in the knee; some other got a dislocated thumb. Then, the devotees tried to close the doors and keep them shut by pushing some beds and chairs against the doors and then tying them with some cloth with the hinges of the door. This worked for a few minutes, but the doors flew open again. The cyclone was just gaining more and more speed. The hall was flooding. Only whiteness could be seen outside. The wind was so high and the pressure was so low that everyone’s ears began clogged up; it was deafening. This continued for two hours from about 10 am to 12 pm.

Practically all of the glass windows were shattered. The basement was flooded. The huge stones from the stone gate of the math property had fallen down. The grills on the pushpa-samadhi and the Gopeshvara-mandir were hanging on a hinge. The goshala was shattered. The white guesthouse rooms were soaked and flooded. The huge metal dome on the top of the temple had collapsed and toppled backward onto the roof. The roads were horrid. There were raw coconuts all over the town. Practically, all of the coconut trees were leafless and many had totally collapsed. Tin sheds had flown hundreds of meters from their resting places. All of the brick walls of various buildings were fallen on the road.

The guesthouse which houses the bhajan-kutir of His Divine Grace Srila Bhakti Pramode Puri Goswami Thakur was majorly affected as well. Glass was shattered everywhere. The rooms were flooded. Much of the rooms on the roof had totally collapsed. The tin roofs had flown away and were broken. The new guesthouse was also totally flooded with seawater and rainwater.

Right now, there is still no electricity. A few mobile networks have begun functioning but very sparsely. Water is arranged from a tube pump. The total cost of damages is about 50 -60 lakhs (US$80,000)

We request devotees to donate generously to help with the reconstruction of the temple and guesthouses. Yours in the service of Sri Krishna Chaitanya Mahaprabhu’s Mission,

After making any donation please email us your name, contact details, address and amount donated to info@GopinathGaudiyaMath.com for our records. Be assured this information will remain confidential.

For any inquiry please email info@GopinathGaudiyaMath.com

You can choose to donate by clicking below

If you want to pay any other way please let us know. 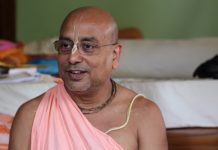