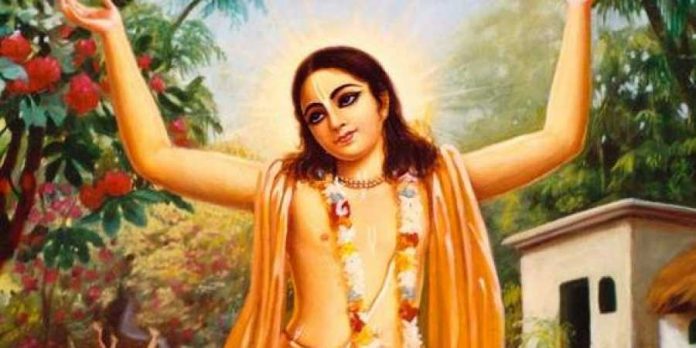 The earth was suffering from high turbulence of castism and racism and was dominated by cruel rulers of demoniac nature whose actions were inhuman and irreligious. There was a lot of violence and to live a peaceful life was next to impossible. Brahmins and other upper castes in the society, whom the people would normally look up to for leadership and guidance, created and forced others religious practices for selfish motives and pseudo asceticism instead. Thus, people were extremely distressed and had no choice but to follow these sinful principles in the name of religion in order to maintain their livelihood. With no options left, these people in their despair begged for mercy from the Supreme Lord and prayed for shelter at His lotus feet. Would there be any hope for them?

When the entire society was in the tremendous turbulence, the land of Bengal was blessed with the appearance of a great luminary on 7 March 1486. Sri Chaitanya Mahaprabhu, prophesized as the incarnation of divine love by the Vedic scriptures, was born in a Brahmin family in the town of Navadwip, West Bengal, India. Throughout his life, acquaintances affectionately referred to Him by many names, such as Sachinandan, the son of Sachi, His mother. Because His birth took place under a neem tree, He was also lovingly called Nimai, especially during His childhood and youth. The townspeople knew Him as Gauranga, because of His light, golden skin, and physical beauty. Later in life, upon taking vows of renunciation, He would formally be given the name Chaitanya, and after His reputation as a great saint spread, the honorific title Mahaprabhu (great master) was further bestowed upon Him.

Chaitanya’s forefathers came from Sylhet in East Bengal but had left their ancestral home to come to Navadwip, which was then a great center of learning. They established the new family home on the banks of the Ganges, where Chaitanya’s father Jagannath Mishra had been born. Chaitanya’s mother Sachi was the eldest daughter of another Navadwip scholar, the astrologer Nilambar Chakravarti. The young couple had eight successive daughters, but none survived childbirth. Finally, Sachi’s ninth child, a boy named Vishwarupa, was born. Twelve years later, Chaitanya followed.

Chaitanya’s birth corresponded with Krishna’s spring swing festival, Dol Yatra, which is celebrated on the full moon day between February and March. Vaishnava theologians say that Krishna, who is always absorbed in the love of His precious gopis, accepted the mood and golden hue of the Goddess Radharani and left his beloved Vrindavan to appear in his secret abode of Navadwip, the hidden Vrindavan. In this incarnation, He flooded the land of Bengal with divine love and brought order back into the land’s political, judicial, and social orders.

Ordinarily, on the full-moon day, the moon proudly rises to bathe the world in pure, gentle rays of silver. On the Dol Purnima of 1486, however, there was an eclipse, as though nature was announcing that another moon, unique and divine, was also rising on that night—one that was greater in fullness, purity, coolness, gentleness, generosity, and poetic beauty than any ordinary moon, or indeed any other joy-giving thing in the world. As it was spring, the still leafless trees were filled with fresh new twigs and copper-colored sprouts. The mango buds were attracting swarms of buzzing bees in search of nectar, while the flower shrubs and creepers waved their branches and spread their fragrance in the wind. It was as though the goddess of nature herself was a young bride who, on hearing the jingling ankle bells of her groom, the Lord of the infinite worlds, had dressed herself in all her finery and was now eagerly awaiting his arrival for the wedding. Seeing nature take on such a beautiful aspect, one could easily conclude that this truly was the day that the Creator and His creation were to be united.

The ladies of the town blew their conch shells, filling the earth and sky with an auspicious reverberation. In every direction, the earth was filled with peace; the river waters were calm and even the ordinary plants and creatures seemed to be filled with joy. The world was awash with bliss. The sound of the Supreme Lord’s name was on everyone’s lips and all hearts overflowed with happiness. It was as though all were holding their breath in expectation of His appearance as Nimai, the son of Sachi.

At the very moment the world was filled with the sound of people everywhere calling out the names of God [in response to the eclipse], Krishna descended to the earth in his golden form. (Chaitanya Charitamrita 1.13.94)

Krishna appears in this age of Kali in the form of His name. This entire universe will be saved by chanting the names of God. (Chaitanya Charitamrita 1.17.22)

There is no religious practice in this age of Kali other than the chanting of the Holy Names. The Holy Name is the essence of all mantras—this is the fundamental meaning of all the scriptures. (Chaitanya Charitamrita 1.3.99)

After Chaitanya’s birth, astrologers assessed his birth chart in preparation for his name-giving ceremony. They concluded that, in accordance with the scriptures, the name Vishwambhar was appropriate, for it means one who supports, nourishes, and protects (bhara) the universe (viçvam). Nevertheless, everyone continued to affectionately call him Nimai. He was born under the neem tree and his mother’s nickname was Ai; thus, he got the nickname “Nimai.” He also had other names according to his qualities. He was golden in color, so people used to call Him Gaura, Gauranga, Gaurahari, Gaurasundara, and Gauragopala. He was also known as Sachinandana and Jagannathsuta because He was the son of Mother Sachi and Father Jagannath Mishra.