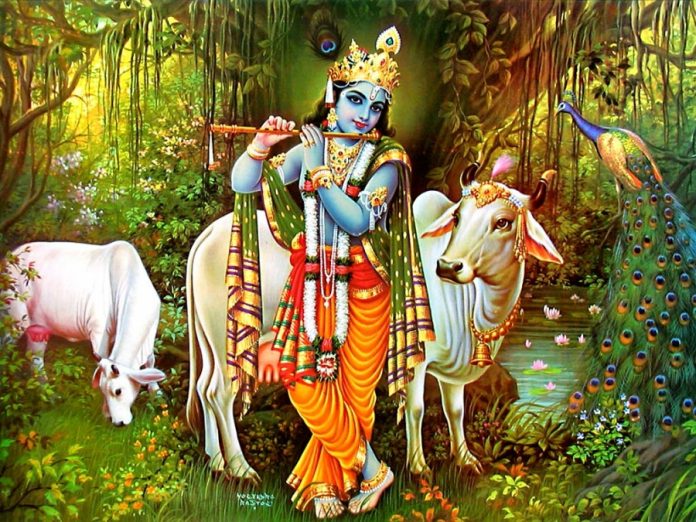 In the revealed scriptures, the ultimate object of knowledge is Śrī Kṛṣṇa, Vāsudeva, the Personality of Godhead. The purpose of performing sacrifice is to please Him. Yoga is for realizing Him. All materially motivated activities are ultimately rewarded by Him only. He is supreme knowledge, and all severe austerities are performed to know Him. Religion is rendering loving service unto Him. He is the supreme goal of life.
(Śrīmad Bhāgavatam First Canto, Chapter 2, Verses 28 and 29)

For those on the path of Bhakti-yoga, the path of loving service to the Supreme Personality of Godhead in His original form as Gopal Kṛṣṇa, it is inconceivable how anybody could be attracted to or worship any other of the countless manifestations of the Supreme Lord. God in His most intimate, most approachable, most loving, most joyous, most sporting and most beautiful form is Śrī Kṛṣṇa, the son of Vasudeva.

And when it is said that man was created after the image of God, that is because Śrī Kṛṣṇa in His original form as a cowherd boy has humanlike features and He made the human form, His most precious creation, look like Himself.

Why is the human form His most precious creation? After having created all the other forms of material life, i.e. animals, beasts, birds, fish, insects, plants, trees and even the celestial beings, He did not feel satisfied because in none of those forms the souls would be able to or interested in rendering loving service unto Him. In the body of an animal, a bird, a fish or a plant, life is so miserable for the soul inside that there is no thought of inquiry about some Higher Truth. And in a celestial body in the heavenly realm, free from any disease or old age, the soul is so absorbed in enjoyment that the necessity to enquire about the Absolute Truth cannot be seen either.
Therefore He at last created the human form of life with a consciousness in the middle between heavenly enjoyment and hellish suffering. He equipped it with the intelligence to enquire about and understand something about Him, the Absolute Truth, and the capacity to render loving service to Him. And still, because of their spiritual immaturity even in the human form of life most souls dedicate their actions towards how to eat better, sleep better, protect themselves better and have better sex. Thus the human life is wasted.

But Śrī Kṛṣṇa is most merciful. He indiscriminately and patiently works on every single one of the fallen souls in this material world and eventually each one of us will start to wonder about Him, Śrī Kṛṣṇa, the Lord of Love and Harmony.